89. Admiral James Stavridis. The Brilliant Navy 4-Star and Rieckhoff Break Down the Pandemic, Trump vs the Pentagon, Biden’s Controversial Picks for Veterans Affairs and Defense, The Future of Independent Politics, Cold Martinis and Fiat Convertibles. 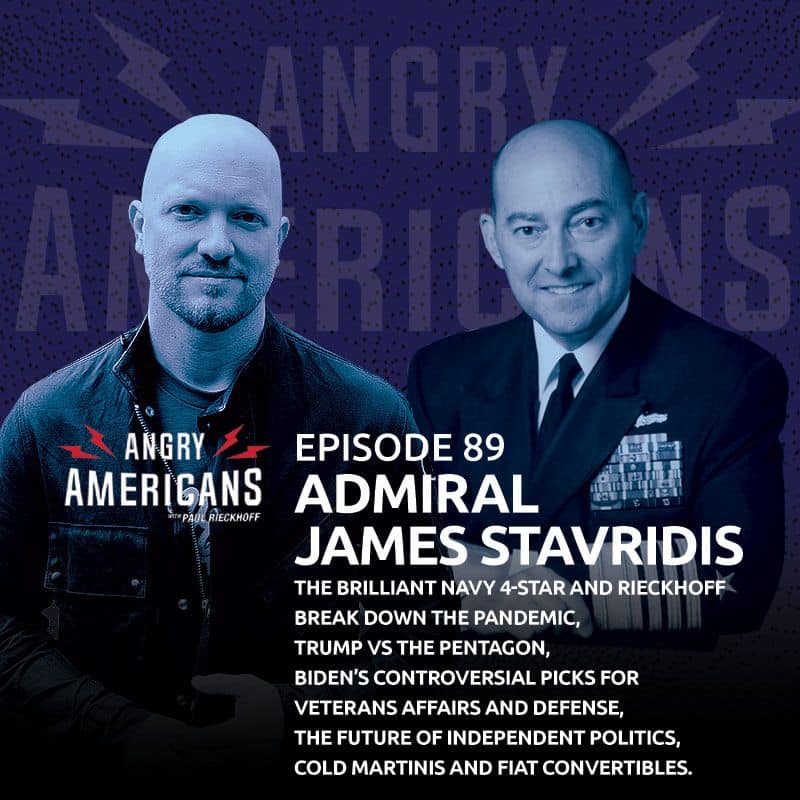 The anniversary of the devastating attack on Pearl Harbor was this week. And almost exactly 79 years later, American is experiencing a Pearl Harbor loss of life from the pandemic every single day. And just like after Pearl Harbor, our national response will be led by America’s military. It’s the Department of Defense (and the Department of Veterans Affairs) that will help distribute and administer the vaccine nationwide to everyone. Both agencies are in chaos–and were already under political attack from President Trump. Now, President-Elect Biden surprised the nation with the controversial selections of General Lloyd Austin for Secretary of Defense and Denis McDonough for Secretary of Veterans Affairs.

As America navigates these treacherous waters, we have an inspiring, important, iconic leader to guide us through it. Retired Navy 4-star Admiral James Starvridis. [25:35] He led the NATO Alliance in global operations as Supreme Allied Commander with responsibility for Afghanistan, Libya, the Balkans, Syria, counter piracy, and cyber security. The Admiral is a great American success story. The grandson of immigrants who fled ethnic cleansing in Turkey, Starvridis wrote of his immigrant grandfather: “His grandson, who speaks barely a few words of Greek, returns in command of a billion-dollar destroyer to the very city—Smyrna, now called İzmir—from which he sailed in a refugee craft all those years ago.”

Stavridis is built to serve. He’s an inspiring leader. He has a deep respect and regard for history. His perspective is deep. His vision is clear. He’s the perfect voice for the time we’re all facing. As President Mayhem dismantles the election, the Pentagon, and Democracy itself, President-Elect Biden returns to business as usual. And not in the good way. When the waters are this rough, we need an Admiral. It’s time us to all get on board, rush to our stations, man the guns, and face the storm. And this is the analysis you need to hear. Stavridis and Rieckhoff break down all of it.

You can also watch video of this conversation with Admiral Stavridis and a wide range of music, political, business and media players from Chuck D to Jeffrey Wright to Medal of Honor Recipient Flo Groberg to Sarah Jessica Parker to Stephen Colbert to Meghan McCain to Mayor Pete Buttigieg on the Righteous Media YouTube page. It’s political, social and industry diversity like no other show in America.