93. Chuck Hagel. Insurrection in America. Terror in the Capitol. President Mayhem blows it all up. All living SecDefs sound the alarm. The Dems take Georgia. What happens next? The former SecDef and Rieckhoff break it down. 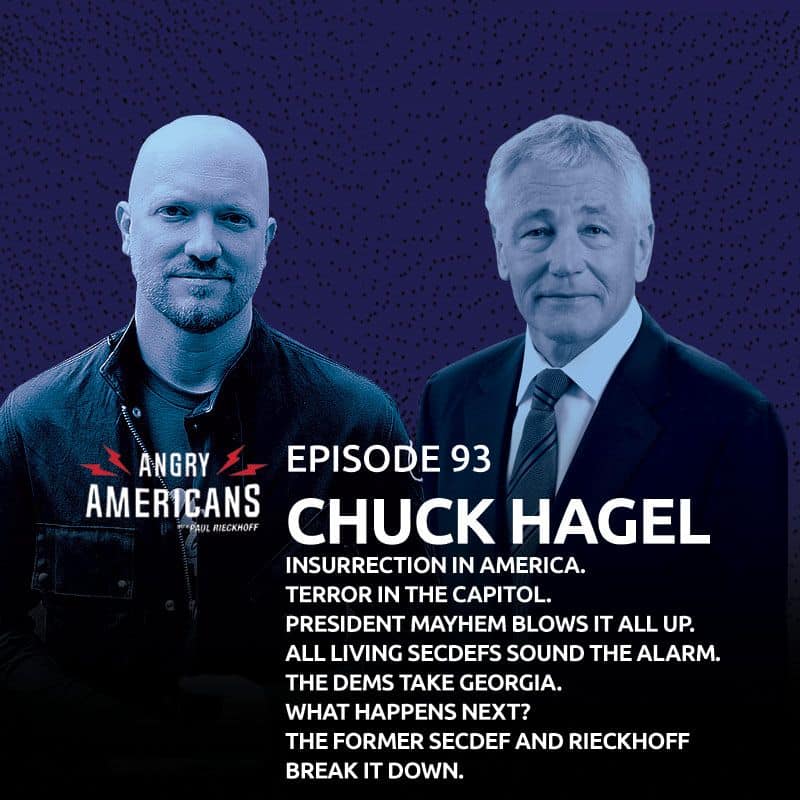 America is under attack from within. Domestic terrorists invaded the Capitol. President Mayhem is blowing it all up on his way out. For months on Angry Americans, we warned that this could happen. It’s a dark time for all Americans. But this episode will help you understand it, unpack the causes and failures, and prepare for what comes next.

Chuck Hagel is back to break it down with our host: Army veteran and Founder of Iraq and Afghanistan Veterans of America (IAVA), Paul Rieckhoff (@PaulRieckhoff). Hagel shares unparalleled experience and perspective in this fragile time. He served as the Secretary of Defense under Obama and as a Senator from Nebraska. An independent Republican and the first Vietnam veteran in American history to lead the Pentagon, Hagel has been a straight-talking voice of reason for decades. And after joining us for a powerful Episode 82, he’s back now to analyze the unfolding national security and political crisis. He also explains how the urgent, unprecedented OpEd he authored with the other nine living former secretaries of defense secretaries came together. How did this happen? What will the military do now? How bad is it all? Hagel also breaks down the historic win for the Democrats in the Georgia Senate run-off election–and the future of our politics. This pod smartly and uniquely tears into all of it.

See video of this conversation with Secretary Hagel and a range of music, political, business and media players from Chuck D to Jeffrey Wright to Medal of Honor Recipient Flo Groberg to Sarah Jessica Parker to Stephen Colbert to Meghan McCain to Mayor Pete Buttigieg on the Righteous Media YouTube page. It’s political, social and industry diversity like no other show in America.