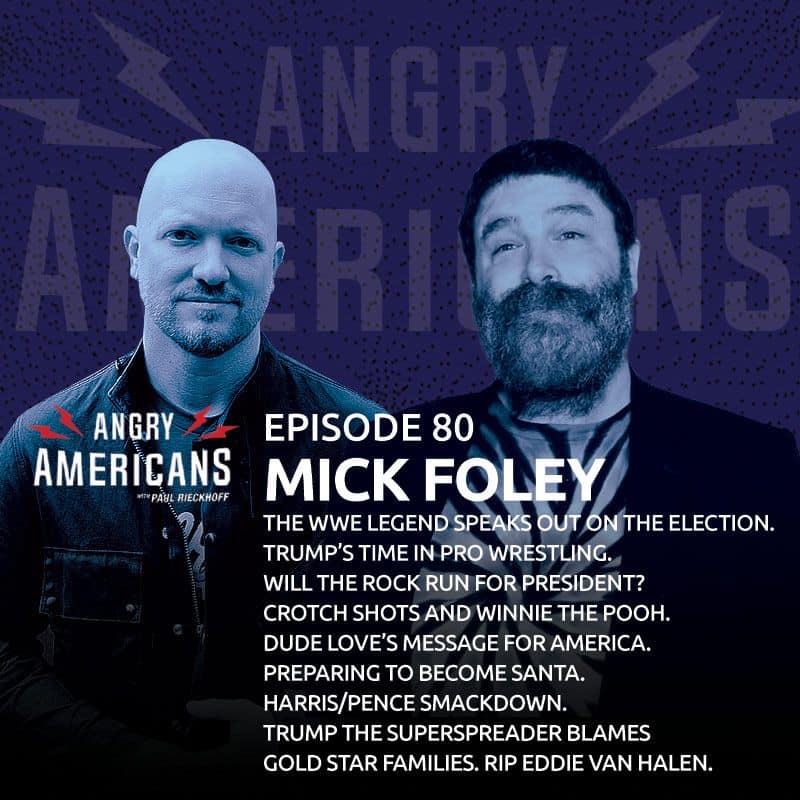 From Trump’s time at Wrestlemania and subsequent induction into the WWE Hall of Fame, to rumors of Dwayne “The Rock” Johnson running for President, to Linda McMahon’s run for the Senate, to Jesse “The Body” Ventura’s surprise independent election as the Governor of Minnesota, American politics and wrestling have been intertwined for decades now. And they’ve never looked more similar than right now. Every day is like a political battle royale. And Trump is like the worst heel ever–fighting with anyone and everyone–even blaming his recent COVID infection on Gold Star families.

WWE legend Mick Foley (@TheRealMickFoley) is one of the greatest and most beloved professional wrestlers of all time–and our first guest that has his own action figure. In 2013, he was inducted into the WWE Hall of Fame (the same year as Donald Trump). He’s played Mankind, Dude Love, and Cactus Jack. But his best and most important character that Mick Foley plays is himself. He’s also a two-time best-selling author, a father of four, a dedicated supporter of the military and veterans charities, a constant source of support for children’s causes, and an inspiration to millions worldwide. He even grows a beard every year to play Santa Claus. But he’s been silent on the 2020 election–until now. Mick Foley enters the ring to break his silence exclusively on Angry Americans to speak out about the election, the state of affairs in America, Donald Trump, Joe Biden and whether or not he thinks The Rock will run for President one day.

In the wake of Trump’s diagnosis with COVID, the spread of the virus throughout the White House, and the first and only VP debate between Mike Pence and Kamala Harris, it’s an episode that lays the political smackdown you need. Paul Rieckhoff (@PaulRieckhoff) is our referee, making sense of these times, sharing information that empowers you, and leaving you with stories and wisdom that will inspire you.

With less than a month until the most important election in American history, and Trump sidelining more of our military leadership than our enemies ever have, Angry Americans is your independent source for news, politics, culture and inspiration. You’ll meet powerful, fascinating guests like Mick and always get a unique, independent and hard-hitting perspective like nowhere else in the media. This episode is possible thanks to those Patreon members and support from Uncle Nearest Premium Whiskey. Uncle Nearest is the most awarded American whiskey or bourbon of 2019 and 2020.

If you’re not angry, you’re not paying attention. Especially after all this madness. But this show is always also about being active, informed and vigilant. It’s bigger than any party–and truly about putting our country first. If that’s a side you want to join, tag into our Angry Americans Patreon community and get special behind-the-curtain access to our host, Paul Rieckhoff, our dynamic guests, and discounts on Angry Americans merch and exclusive extra content not available anywhere else.

Join the movement. Download this episode now. And at AngryAmericans.us or on our YouTube page, you can watch this entire conversation with Mick Foley and recent episodes with Stephen Colbert, Mayor Pete Buttigeig, Jeffrey Wright, Meghan McCain and more.