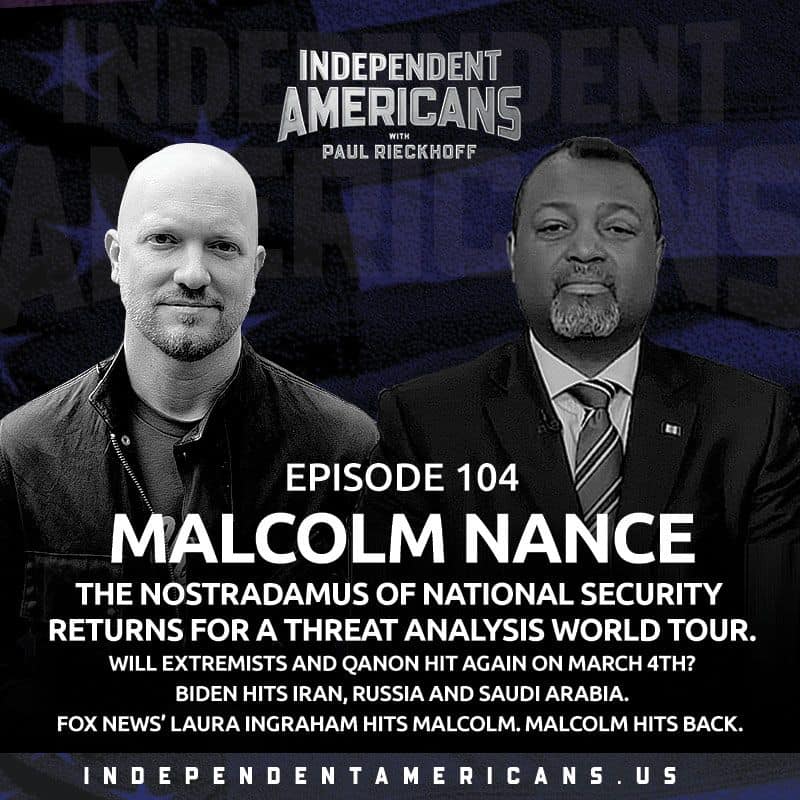 Independent Americans is your trusted, independent source for news, politics, culture and inspiration. It’s a smart, fresh, candid perspective you won’t find anywhere else in the media. And we’ll always be grounded in a focus on national security, foreign affairs and domestic threats.

Despite the lack of media coverage, America is still very much at war. While the rest of the media obsesses over Trump’s CPAC appearance, Ted Cruz’s travel, and changes to Mr Potato Head and Dr Seuss, we’re digging into the real and urgent threats facing you, your family and our country.

Why are defense leaders guarding against extremists strikes again this week on/around March 4th? Why that date? What’s the story behind the recent missile strikes in Syria ordered by Biden? What will happen next with Russia after new sanctions? With our country slammed by COVID, will our enemies use this opportunity to strike? Where’s the next hot spot in the world for the US military? Why did Laura Ingraham and Fox News put a target on the back of one of our frequent guests and a decorated Navy veteran?

Our host, Army combat veteran and author Paul Rieckhoff (@PaulRieckhoff) is bringing his extensive national security and political expertise to focus this vital episode on the under-reported national security threats that should keep all Americans up at night. It’s a look into the stories that aren’t on the front pages, but probably should be.

And we’re doing a rapid-fire tour of the global landscape with one of our most popular guests of all time: Malcolm Nance (@MalcolmNance). America’s favorite terrorism expert, Malcolm is a decorated military veteran, an astute analyst, and a truth teller, MSNBC’s Terrorism Analysts and a NY Times Bestselling author, the retired Navy Master Chief served as a specialist in Naval Cryptology and was involved in counter-terrorism, intelligence, and combat operations around the world and served as an instructor in Survival, Evasion, Resistance and Escape (SERE) training. He’s also one of the most interesting guys anywhere. The man has stories–and enemies foreign and domestic. That now includes Fox News primetime host, Laura Ingraham.

Last fall, Malcolm joined this show and predicted the kind of post-election violence we saw in Washington on January 6th. Back in Episode 13 and Episode 94, he also predicted national security threats to come. And he joins Independent Americans again now to share some new predictions.

America is more divided than ever before. But Independent Americans is adding light to contrast all the heat of other political shows. Every episode brings the Righteous Media 5 I’s: independence, integrity, information, inspiration and impact–and explores the most pressing issues of the day with leaders who are shaping what America will be in the future.

And join us for exclusive access and events by becoming a member of the Independent Americans Patreon community. For just $5, you get access to events, our guests, merch discounts and exclusive content.

You can also see video of this conversation with Malcolm Nance and over 100 episodes with leaders from Chuck D to Chuck Hagel; Sarah Jessica Parker to Meghan McCain; Stephen Colbert to Mayor Pete Buttigieg on the Righteous YouTube page.