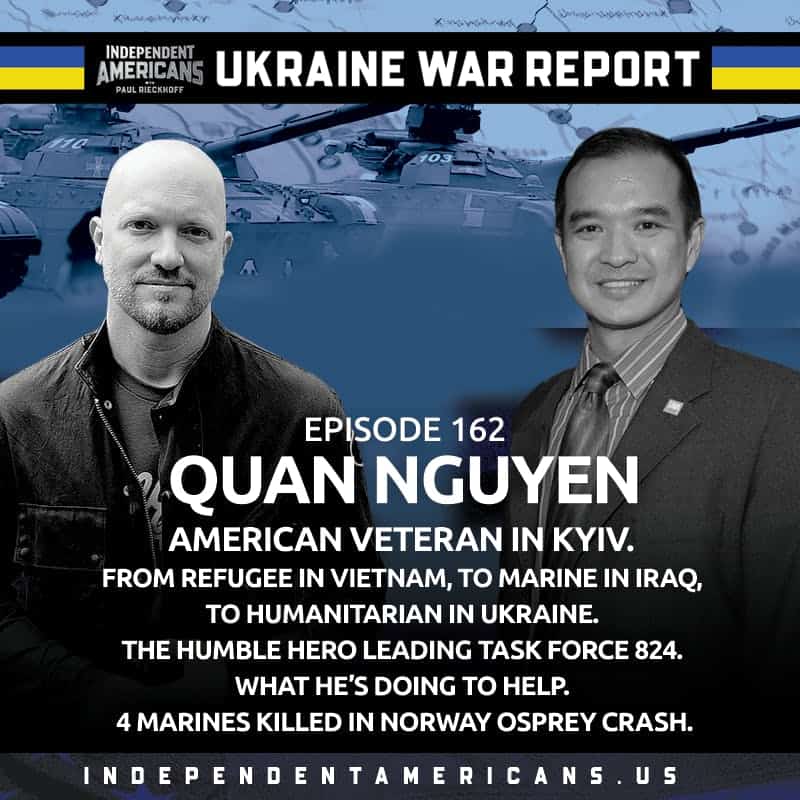 ​​“We can’t help everybody…but just knowing that you were able to be part of somebody’s future and helping them escape. Who knows, that person could be the person that cures cancer.”

Quan Nguyen is a leader of action. And a true helper. And when the war in Ukraine started, the American combat veteran left his family in Utah, got on a flight, and linked up with a friend in Lviv to do what he could to help. He’s put down his rifle, risked his life, and is now helping children who are refugees from war like he once was long ago. He’s founded a new non-profit, called Task Force 824, named in honor of Ukraine’s Independence Day (8/24). Led by Quan, Task Force 824 is a non-profit of non-sanctioned individuals working together to provide humanitarian aid to Ukrainian citizens affected by the recent Russian invasion. They are transporting refugees to safety and delivering supplies to safe houses in Ukraine.

Quan Nguyen has had an amazing life journey. As a young boy, he fled Vietnam and lived in a refugee camp for over a year. He and his family would find refuge in America. And Quan would grow up and go on to serve in the Marine Corps as an infantryman with combat tours in Iraq and Afghanistan. After returning home from combat, he built his own small business and worked in technology for two decades. And he continued his life of service. He supported his fellow veterans as a Deputy Director for the Western Region for Iraq and Afghanistan Veterans of America (IAVA), with the Combat Veterans Motorcycle Association, and with other nonprofits. When IAVA kicked off a groundbreaking national tour to combat suicide with legendary rock band Linkin Park, it was Quan that led the way. For an entire national tour with Mike Shinoda and the late Chester Bennington and the band, in dozens of cities, he worked with the crew to promote awareness, host veterans, share mental health resources, and save lives.

Quan is an old friend and colleague of our host, Paul Rieckhoff (@PaulRieckhoff), and joins us for a session just recorded from inside Kyiv-–as the city continues to await an imminent Russian assault. Quan spoke to us as artillery rounds fired off behind him, and air raid sirens and the threat of missile attacks swirled all around. It’s a brave, riveting and inspiring conversation unlike anything else you’ll hear in American media. It’s the kind of ground truth you can expect from Independent Americans and Righteous Media.

Every episode of Independent Americans (@Indy_Americans) hosted by Paul Rieckhoff is the truth beyond the headlines–and light to contrast the heat of other politics and news shows. It’s content for the 42% of Americans that proudly call themselves independent. And delivers the Righteous Media 5 Is: independence, integrity, information, inspiration and impact.

–Learn more about Task Force 824 and how you can help support their vital work.

–See the Linkin Park video for Wastelands that Quan and Paul helped create with LP.

–Tell your member of Congress to support HR 987 – Expressing gratitude on behalf of the people of the United States to the journalists and news staff who are risking injury and death, are subject to grave threat, and have sacrificed their lives, to chronicle and report on the ongoing war in Ukraine resulting from Putin’s invasion.