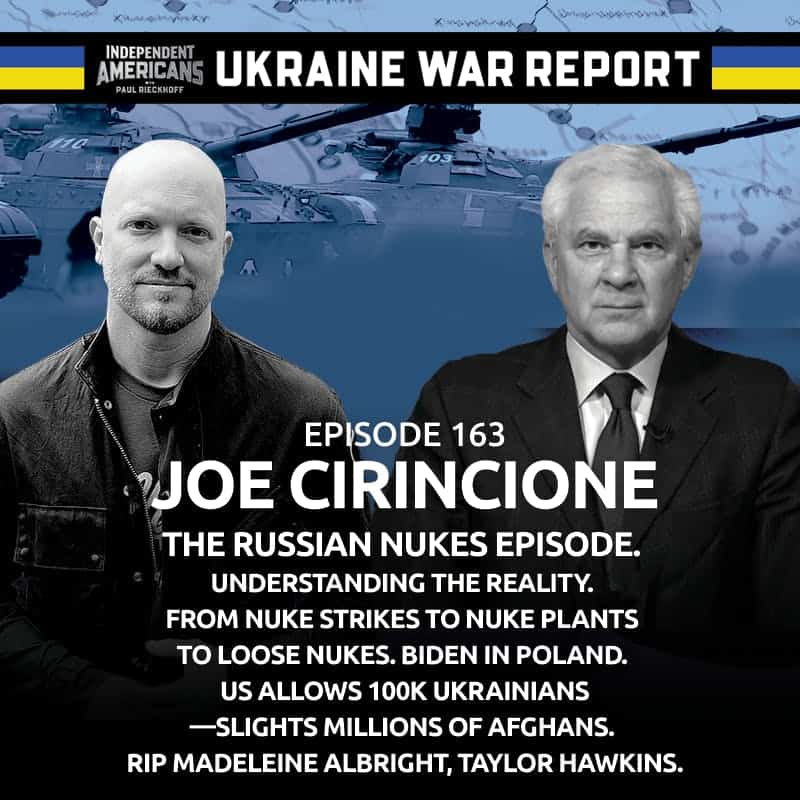 The war in Ukraine has shifted into a new phase. Putin is quickly becoming more and more isolated. And more and more brutal. But Ukraine is on the offensive. And more and more by the day, the mighty Ukrainians are looking like they can win this thing. Almost single-handedly. On behalf of the world. But make no mistake. It can get worse. MUCH worse. Especially in Ukraine.

Worse than the targeting of schools and churches.

Worse than the shelling of civilians flying.

What’s the worst that could happen?

Joe Cirincione (@Cirincione) is back. He worked on nuclear weapons policy in Washington for more than 35 years and is one of the top experts in the field. He was the Director for Non-Proliferation at the Carnegie Endowment for International Peace and author of Deadly Arsenals: Nuclear, Biological and Chemical Threats, and co-author of Universal Compliance: A Strategy for Nuclear Security. He was the president of Ploughshares Fund, a global security foundation. Taught at the Georgetown University Graduate School of Foreign Service. He’s one of America’s best known weapons experts, appearing frequently in print and on FOX News, MSNBC, CNN, ABC, NBC, PBS, NPR and occasionally on Comedy Central. After joining us for Episode 141 – Nov. 18, 202, he’s back to drop knowledge bombs about nukes. And it’s an episode you don’t want to miss.

Every episode of Independent Americans hosted by Paul Rieckhoff is the truth beyond the headlines–and light to contrast the heat of other politics and news shows. It’s content for the 42% of Americans that proudly call themselves independent. And delivers the Righteous Media 5 Is: independence, integrity, information, inspiration and impact. Always with a unique focus on national security, foreign affairs and military and veterans issues. This is another pod to help you stay vigilant. Because vigilance is the price of democracy. In these trying times especially, Independent Americans will continue to be your trusted place for independent news, politics, inspiration and hope.