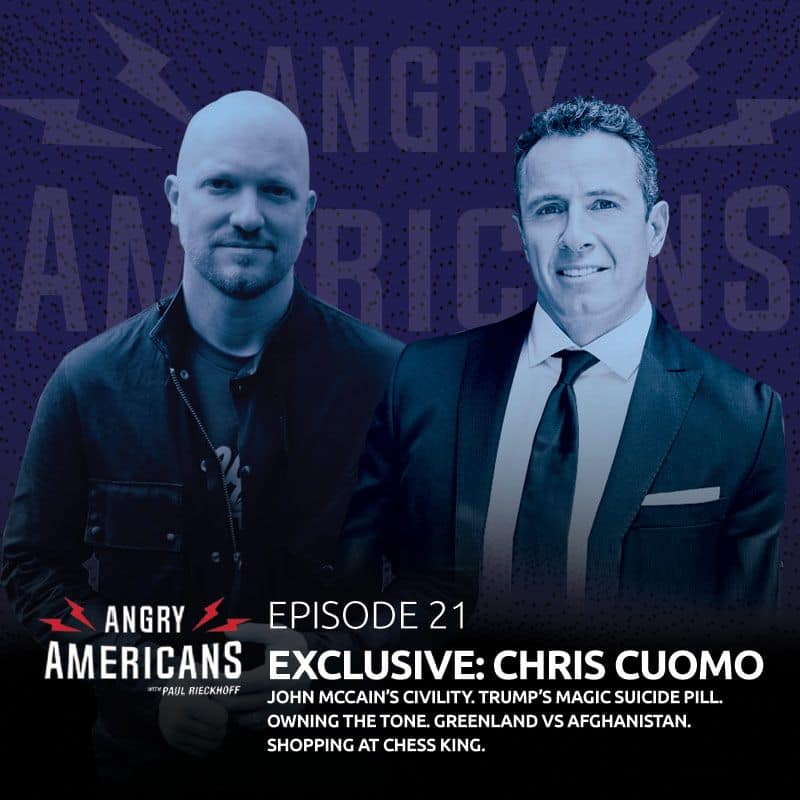 Chris Cuomo (@ChrisCuomo) grew up in the political and media crossfire. He knows how to mix it up with the world’s most powerful people in politics and media. And in the last week, the Emmy-award-winning journalist has found himself in the middle of the headlines like never before. The controversial host of CNN’s Cuomo Prime Time and SiriusXM’s Let’s Get After It sat down exclusively with Paul Rieckhoff (@PaulRieckhoff) for an extended interview about the state of affairs in America, the White House assaults on the media, Trump’s attacks on him personally, and the recent incident that dominated headlines worldwide. (48:40)

Chris was a co-anchor of 20/20 and an anchor on Good Morning America. But he’s really breaking news journalist. He’s not just an anchor behind a desk. He’s the kind of guy that gets out into the field. With the people. Chris has been all around the world, covering the biggest and toughest stories from Iraq and Afghanistan to Hurricanes Katrina and Rita. And Cuomo talks candidly about the last few weeks under the media microscope and in the nasty crosshairs of Trump’s Twitter account. He also shares stories of his Italian-American upbringing, parenthood, fishing, fitness and his very first car (it’s unforgettable one). Chris Cuomo is a guy millions know from TV. But he’s also a father of three, a man of faith, and a dude who loves sports and working out. This episode will reveal a personal side of the Chris Cuomo that you’ve never heard before.

And Paul Rieckhoff does what he does best. Asking probing questions of his guests and framing up the big picture of what’s happening in America. And ripping through the most important stories you may have missed or need to know more about. The Army veteran and renowned activist examines how Trump’s tone has become insidiously invasive and contagious. And how on the one-year anniversary of Senator John McCain’s death, that toxic tone is in direct contrast with leaders like John McCain, George Washington and Stephen Colbert. Rieckhoff also explores the violent and breaking news out of Afghanistan, digs into a tragic political fight that’s hurting Gold Star families, and rips into why a focus on Greenland is sucking attention away from the American Marine veteran and journalist, Austin Tice, who was taken prisoner in Syria 7 years ago this month. And with football season coming soon, Rieckhoff analyzes the political importance of Vince McMahon’s new XFL football league.

It’s a news-making episode of Angry Americans that is possible with help from our friends at Mizzen+Main (@MizzenAndMain). Mizzen+Main is an American company from Texas that makes the most comfortable dress shirts on Earth. Made from performance fabrics, these are shirts every man in America should have. Especially now that the heat of summer is upon us. Visit Mizzen+Main’s website at www.Comfortable.AF and use the code ANGRYAMERICANS at check-out to get $10 off an awesome dress shirt now.

Download the new podcast now. And go behind-the-scenes at the members-only Classic Car Club Manhattan for video with Paul Rieckhoff and inspiring and iconic guests like Chris Cuomo, Malcolm Nance, Tom Collichio and Soledad O’Brien at AngryAmericans.us. You can also see American-made Angry Americans merch and find ways to take positive action nationwide and in your local community.