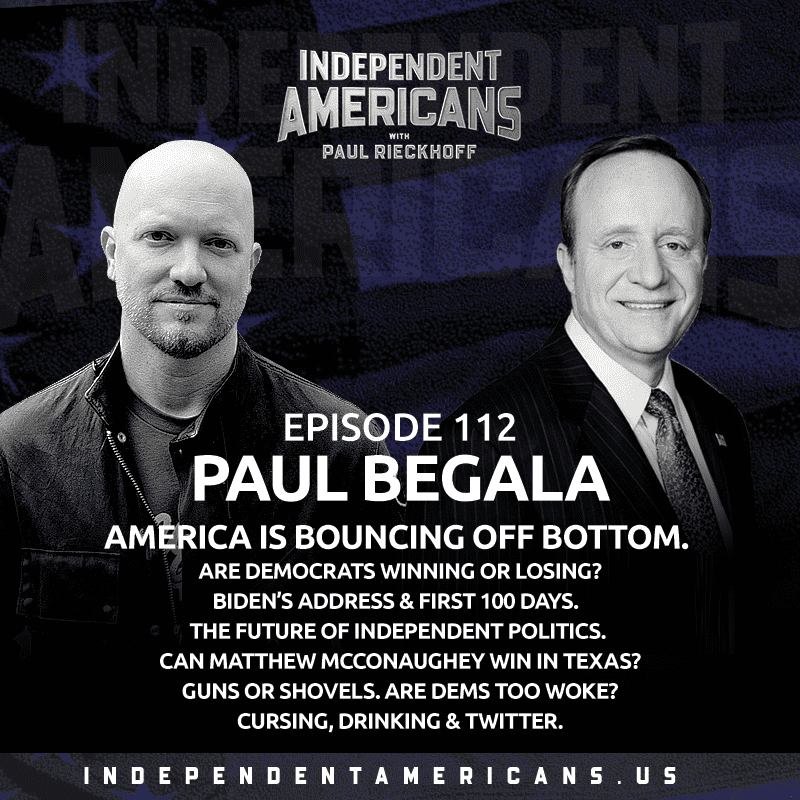 “Thank you for your patience.” That’s how President Biden ended his historic and unusual address to the joint session of Congress. After all we’ve been through over the last four years. And after the last year especially, America was in the roughest place of our lifetime. And we hit rock bottom on January 6, 2021. That was the low point of our lifetime. And damn, it was low. But America is now bouncing off bottom. And Biden’s speech laid it out. 100 days are down. The pandemic is on the run. Trump is off the radar. The vaccines are here. The jobs are coming back. The masks are coming down. And hope is in the air.

And our host, Paul Rieckhoff ( @PaulRieckhoff), breaks it all down. How Biden’s plan will help combat domestic extremism, how he’s making the smartest and most transformative education investment in America since the GI Bill, and what happens now in Afghanistan.

We’re not back yet. But America is on the comeback. And gaining steam fast. But it’s up to all of us to finish the job. But how do we do that? Can our politics do that? Can the Democrats do that? Can the Republicans be a part of that? Are independents the key?

We’ve got the perfect guest for this moment. One of the most influential and impactful political strategists of our time. Paul Begala (@PaulBegala) is a guy who knows about bouncing back. He knows about what it takes. He’s been in the war room. And he understands what it means to bounce off bottom. He led a then Presidential candidate in one of the biggest bouncing off bottom campaigns in history.

Begala was a chief strategist for the 1992 Clinton–Gore campaign, making Clinton the first Democrat to occupy the White House in twelve years. As counselor to Clinton, he coordinated policy, politics, and communications. And later, Begala gained national prominence as part of the political consulting team Carville and Begala, along with fellow Clinton advisor James Carville. They’ve been the Batman and Robin of Democratic politics in America for decades.

Begala’s also been a fixture in political media. He was a co-host of Equal Time on MSNBC with Oliver North, and a co-host on CNN’s Crossfire with Tucker Carlson. Begala now appears regularly on CNN and is a Professor at Georgetown University. He’s also a patriotic American. A gun owner. A farmer. A lover of beer. A bigger lover of Texas. And a very proud husband and father of four boys. And in his own way, even partisan Begala is an independent American. He delivers a fun and motivating master class on current American politics. And shares stories and insights from a fascinating life in the mix. And how we can all be a part of the great American recovery.

Independent Americans is bringing light to contrast all the heat of other political pods. We’re bringing the power of the Righteous Media 5 I’s: independence, integrity, information, inspiration and impact. And a conversation to test you—to enlighten you—and to help you stay vigilant. Because eternal vigilance is the price of freedom.

If you’re a concerned citizen who cares about the future of your country, this is your pod. Be a part of the solution. Join us for exclusive access and events by joining our Patreon community. Get access to events, guests, merch discounts, and exclusive content. And check out new IA merch.

You can also watch video of this show with Paul Begala and 100 others from Sarah Jessica Parker to Meghan McCain; Stephen Colbert to Mayor Pete Buttigieg on the Righteous YouTube page. Independent Americans connects, informs and inspires–and is powered by Righteous Media. On social media or www.IndependentAmericans.us.