158. Malcolm Nance: UKRAINE WAR REPORT. Easy is Over. Behind the Frontline With the Ukrainian Army. NATO Rejects a No-Fly Zone. MWRs (Men With Rifles). American Vets Join Zelensky’s International Legion. Will Someone Kill Putin? Should Someone Kill Putin? 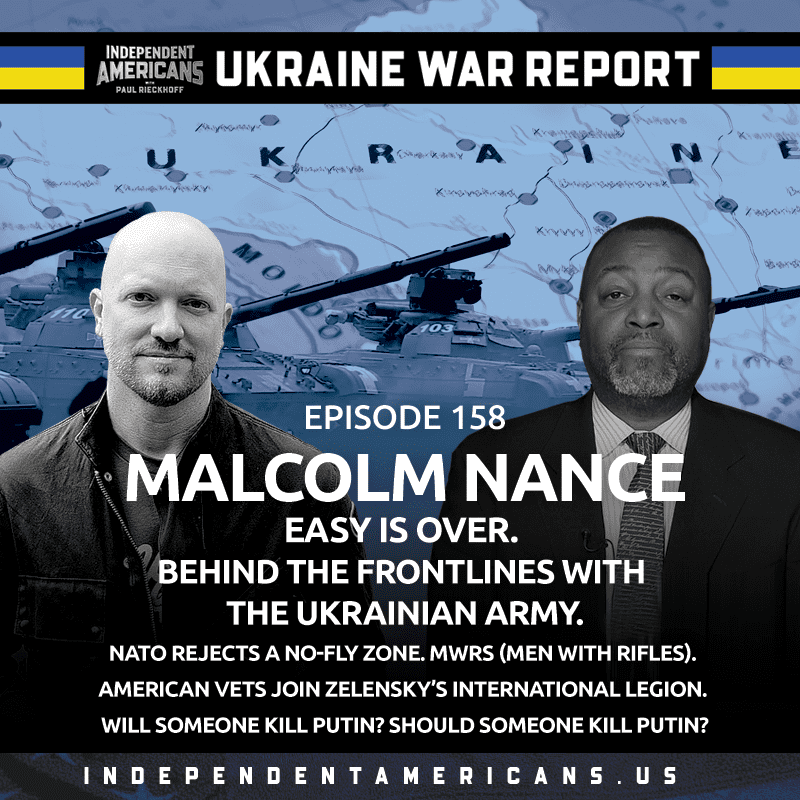 Ukraine remains under siege. Putin’s forces continue to advance and kill countless civilians. And Russia is going dark. Today, Twitter, Facebook and other forms of social media were shut down by Putin all across Russia. We have the latest.

And now is definitely a time to stay vigilant. Because Putin must be stopped. But how?

Garry Kasparov explained it better than anyone should have to when he said,

“If Putin is not stopped now, not prevented from destroying Ukraine and committing genocide against its people, there will be a next time and it will be in NATO, with an unprecedented nuclear threat. Do not let Putin escalate again in a time and place of his choosing.”

That’s the truth America needs to hear from Biden. This is wartime now. Wartime requires sacrifice. The less we sacrifice now, the more we’ll lose.

Total disruption of the world order is Putin’s goal. And on that, he is winning right now. And he is continuing to control the tempo. The rest of the world has to change that.

Having even the slightest feeling that you are making an impact in helping to fix things is massively better than sitting there waiting helplessly for someone else to fix it. The fight of our time is here. And now, more than any other time in our lifetime, now is a time for us all to stay vigilant. And now is also a time for us to fight. In whatever way we can.

Wartime is here. For not just Ukraine. But for the world.

And Malcolm Nance (@MalcolmNance) is back. Just days after returning from inside Ukraine with the Ukrainian Army. America’s favorite terrorism expert, Malcolm is a decorated military veteran, an astute analyst, and a truth teller, TV Terrorism Analysts and a NY Times Bestselling author, the retired Navy Master Chief served as a specialist in Naval Cryptology and was involved in counter-terrorism, intelligence, and combat operations around the world and served as an instructor in Survival, Evasion, Resistance and Escape (SERE) training.

Every episode of Independent Americans hosted by Paul Rieckhoff (@PaulRieckhoff) is pulled from the truth beyond the headlines–and offers light to contrast the heat of other politics and news shows. It’s independent content for independent Americans. And delivers a blast of the Righteous Media 5 Is: independence, integrity, information, inspiration and impact. Always with a unique focus on national security, foreign affairs and military and veterans issues. This is another insightful pod to help you stay vigilant. Because vigilance is the price of democracy. In these trying times especially, Independent Americans will continue to be your trusted place for independent news, politics, inspiration and hope. Stay vigilant, America.

And you can find past episodes with Malcolm here:

-Check out the powerful song featured in the show and support the awesome Ukrainian band Boombox’s fundraiser here.