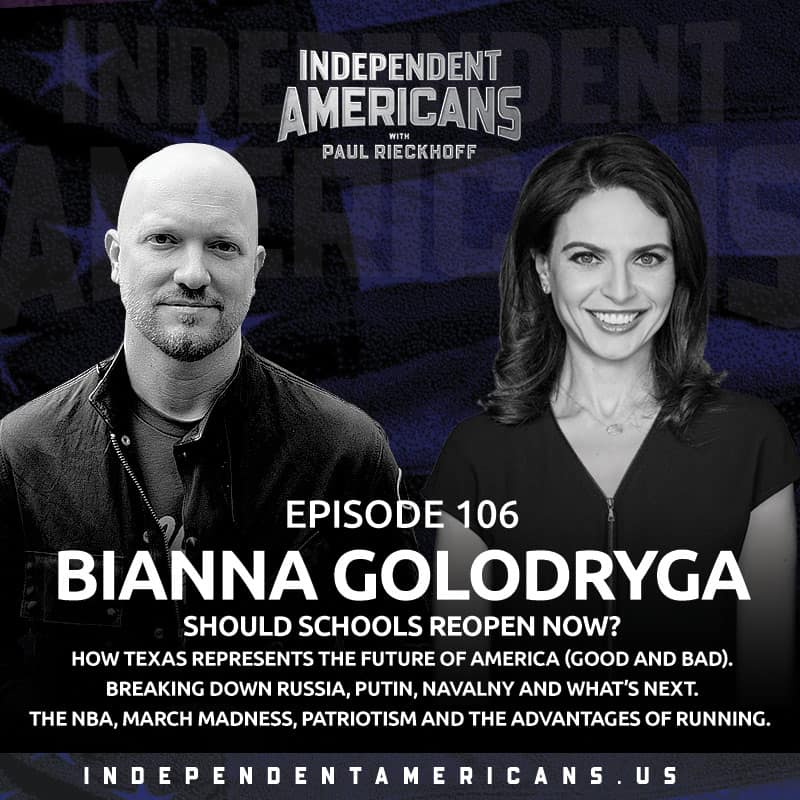 As we finally spring ahead and March Madness begins, Independent Americans is the #1 seed in your bracket for fresh, independent news, politics, culture and inspiration. It’s a no-BS perspective you won’t find anywhere else in the media. One that always dominates the paint on national security, foreign affairs, leadership, and social impact.

March Madness is here. But not just the basketball tournament. Schools are reopening, millions are getting the vaccine, and help from the government is on the way. But the final score of America’s biggest game is still undecided. Texas is still recovering from it’s lights going out, Biden has called Putin a “killer” and put new sanctions on Russia, and a young white white man murdered six Asian American women in a brutal Atlanta shooting spree. March came in like a lion–and is not letting up. And we have a pod—and an inspiring and experienced guest–to help you through to the final buzzer.

Bianna Golodryga (@BiannaGolodryga) has been a thoughtful and trusted fixture in the media for two decades. She is CNN’s dynamic Global Affairs analyst, an expert on Russia, a native Texan, a mother, an inspiring American immigration story, and a huge basketball fan. She’s been co-host of CBS “This Morning”, co-host of ABC’s “Good Morning America”, and an anchor for Yahoo News. After migrating to the US as a child from Moldova, in the former Soviet Union, Bianna grew up in Houston as a Rockets fan, and started her journalism career as a producer for CNBC. She’s interviewed newsmakers including President Clinton, Condoleezza Rice and Warren Buffett. She also went to High School with Beyonce and Estaban Powell from the Texas classic, Dazed and Confused.

Bianna joins Independent Americans and our host Paul Rieckhoff (@PaulRieckhoff) for a smart and fun conversation about the most urgent issues in America. They power through the spin and complexity, and post up on how to survive hard times, parenting in the pandemic, and the importance of caffeine. And Rieckhoff shares what it was like to take one of the biggest shots of his life: the COVID-19 vaccine.

It’s a fast-paced conversation between Rieckhoff and another iconic, important and inspiring American. The kind of conversation with a thought-leader that has defined Independent Americans for almost two years. It’s the perfect podcast to guide you through the madness and into the most anticipated spring of our lifetime.

America is more divided than ever. But Independent Americans adds light to contrast all the heat of other political shows. Every show brings the Righteous Media 5 I’s: independence, integrity, information, inspiration and impact–and leaves you empowered and inspired.

And be sure to check out our very cool new IA merch! Durable camping mugs, cool hats and more.

You can also see video of this conversation with Bianna Golodryga and over 100 leaders from Chuck D to Chuck Hagel; Sarah Jessica Parker to Meghan McCain; Stephen Colbert to Mayor Pete Buttigieg on the Righteous YouTube page.

Independent Americans connects, informs and inspires–and is powered by Righteous Media. Find us on your favorite social media platforms and www.IndependentAmericans.us.