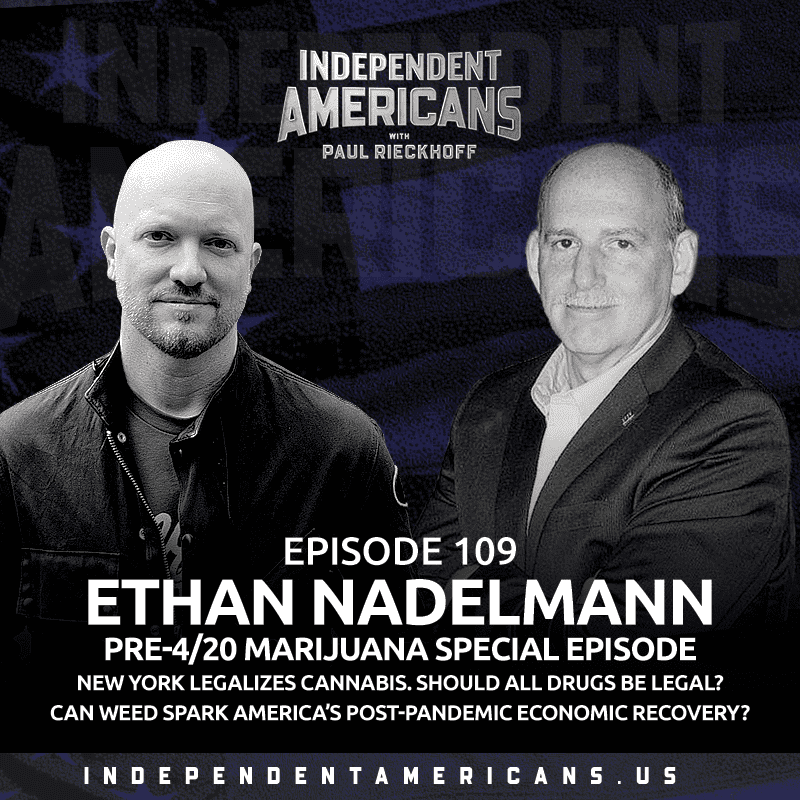 The marijuana reform movement is on fire. In the election last year, beneath all the Biden and Trump drama, every single state-level cannabis ballot initiative passed–from New Jersey to Mississippi to South Dakota. And now, New York state has legalized the green stuff. Federal legalization is gaining steam, the industry is exploding and everyone wants in on the weed movement. Marijuana is no longer a partisan or fringe issue–it’s popular, mainstream and key to the future of the American economy post-pandemic. And it’s got tremendous support from most independent Americans. 7 in 10 independents and moderates back legalization. So as 4/20 (the unofficial marijuana holiday) nears, Independent Americans is sparking up the cannabis conversation again–and continuing our focus on the state of affairs, the controversies, and the future of cannabis. And we’re also digging into broader drug policy changes happening in America from opioids to psychedelics to criminal justice reform.

And so The Godfather of Drugs returns to IA! Ethan Nadelmann (@EthanNadelmann) has been called America’s real Drug Czar. He joined us way back in Episode 12–and he’s back again to bring his unparalleled insight and experience. Ethan has been the mastermind behind the biggest changes to drug policy in US history. A Harvard PhD and the son of a rabbi, Ethan founded the trailblazing Drug Policy Alliance in 1994 and was a lead strategist behind 30 years of reform–including California’s historic 2014 Prop 47 referendum that reduced drug possession for personal use to a misdemeanor. This pivotal political victory proved to be the first domino to fall in a string of historic national changes and unleashed the wave of legalization of marijuana in states all across America we see now—with more to come soon.

Easter and Passover are behind us, March Madness is over, the vaccine is hitting millions of arms daily, and things are warming up nationwide. But few issues are heating up more than cannabis. And few have a more fascinating past–or a more exciting future.

Ethan returns to Independent Americans to chop it up with our host, Paul Rieckhoff (@PaulRieckhoff) to break it all down. Rieckhoff is a longtime advocate for drug reform, who has appeared in the media often on the subject, written about it extensively, testified before Congress about the impacts of cannabis for veterans, and spearheaded the landmark VA Medicinal Cannabis Research Act of 2018.

America is deeply divided. But not about marijuna anymore. And Independent Americans is packing a bowl of light to contrast all the heat of other political pods. Every show is pre-rolled with the Righteous Media 5 I’s: independence, integrity, information, inspiration and impact–to keep you empowered. If you’re a concerned citizen who cares about the future of your country, this is your pod. Be a part of the solution. Join us for exclusive access and events by becoming a member of our Patreon community. Get access to events, guests, merch discounts, Zoom Happy Hour events, and exclusive content. Go check out our cool new IA merch! Durable camping mugs, t-shirts, cool hats and more.

You can also see video of this conversation with Ethan Nadelmann and 100 other leaders from Chuck D to Chuck Hagel; Sarah Jessica Parker to Meghan McCain; Stephen Colbert to Mayor Pete Buttigieg on the Righteous YouTube page. Independent Americans connects, informs and inspires–and is powered by Righteous Media. Find us on your favorite social media platforms and www.IndependentAmericans.us.